Annual passenger vehicle sales in India rose by 45 per cent to 264,442 units in July

The country’s petrol demand is set to hit a record this fiscal year, with consumption accelerating as more people hit the road for business and leisure travel after easing of COVID-19 curbs.

Annual passenger vehicle sales in India rose by 45 per cent to 264,442 units in July, driven by pent-up demand, according to data from the Society of Indian Automobile Manufacturers. 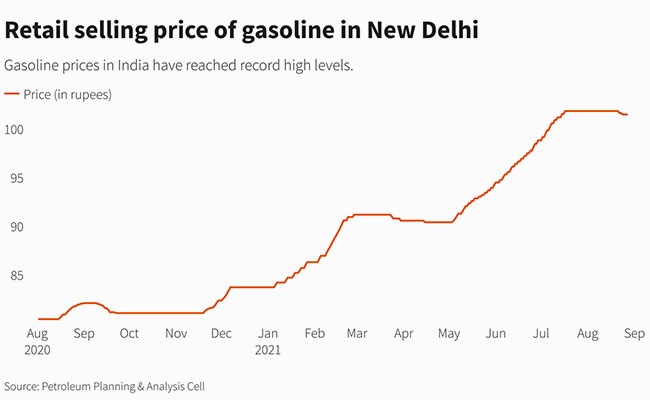 The stronger-than-expected petrol consumption growth could prompt Indian refiners to import the fuel or boost diesel exports in coming months. Indian refineries are traditionally configured to maximise production of diesel, where demand is still below pre-COVID levels, hurt by an uneven economic recovery

“We may have to import some quantity of petrol if momentum in demand continues,” said an official at an Indian state-run refiner, who declined to be identified as he is not authorised to speak to the media.

“We cannot increase crude throughput as some refiners have high levels of diesel inventory and export margins for diesel are not attractive.”

The expected rise in India’s petrol imports could support Asian refiners’ margins for the fuel. The country, which has a refining surplus, has shunned petrol imports since May and raised diesel exports by a fifth in July from April, government data showed.

Sluggish diesel demand has forced some refiners to cut crude oil processing as their fuel storage were full. That reduced India’s July crude oil imports to their lowest in a year.

Changes in India’s fuel demand patterns are crucial for global oil markets as Asia’s third-largest economy is seen as the main driver of rising demand for energy over the next two decades, the International Energy Agency said in February.

Credit rating agency Moody’s India unit ICRA expects India’s petrol consumption to rise 14 per cent to a record 31.9 million tonnes (739,000 bpd) in the fiscal year to March 2022, higher than the 12.2 per cent growth estimates by the Petroleum Planning and Analysis Cell of the oil ministry. 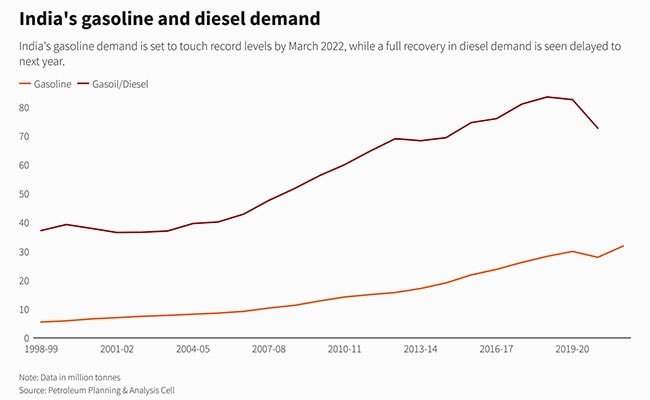 “Owning a personal vehicle used to be a status symbol but because of the hunger to travel during the pandemic, people are buying cars and scooters, and driving up gasoline demand,” Sri Paravaikkarasu, director for Asia oil at FGE said.

India’s petrol demand rebound follows that of China, where consumption of the fuel is expected to rise by 11 per cent to 13 per cent this year to a record 3.8 million to 4.1 million bpd.

On the other hand, diesel consumption – which accounts for two-fifths of refined fuel use in the country and is a barometer of industrial activity – is expected to take well into the fourth quarter or even next year to recover to pre-pandemic levels. 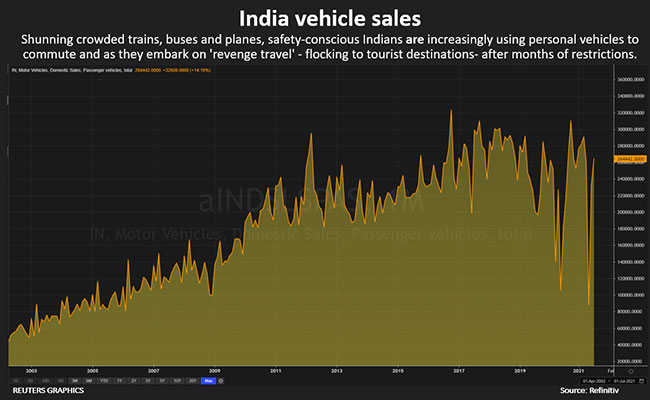 Mukesh Surana, chairman of Hindustan Petroleum Corp (HPCL) said diesel demand could reach pre-COVID levels on a monthly basis later this year but for the fiscal year it would still remain below pre-pandemic level.

“There has to be a complete recovery of the industrial and construction sectors and whole demand and supply chain should come to full swing, until that happens you will not get the full impact of recovery on the diesel side,” Surana said.